MANILA, Philippines – It was 1972 when Beth Gaon gave birth, but days later she and her child died from complications, her parent, Arceli Estioco, said.

Estioco told INQUIRER.net that Gaon, who received no prenatal check-ups, gave birth at home and was only attended by hilots, traditional birth attendants.

So, years later, to achieve its Millennium Development Goal, the government adopted the Maternal, Newborn and Child Health and Nutrition Strategy.

The said strategy, known as the “No Home Birth Policy,” mandated local governments to generate revenue for improving birthing facilities.

RELATED STORY: Studies show maternal deaths in the Philippines are on the decline

This is because home births were considered by the government to be the reason for the high number of maternal deaths in the Philippines.

However, as the Philippine Statistics Authority (PSA) indicates in its “Causes of Death in the Philippines” data, maternal and newborn deaths continue to rise. 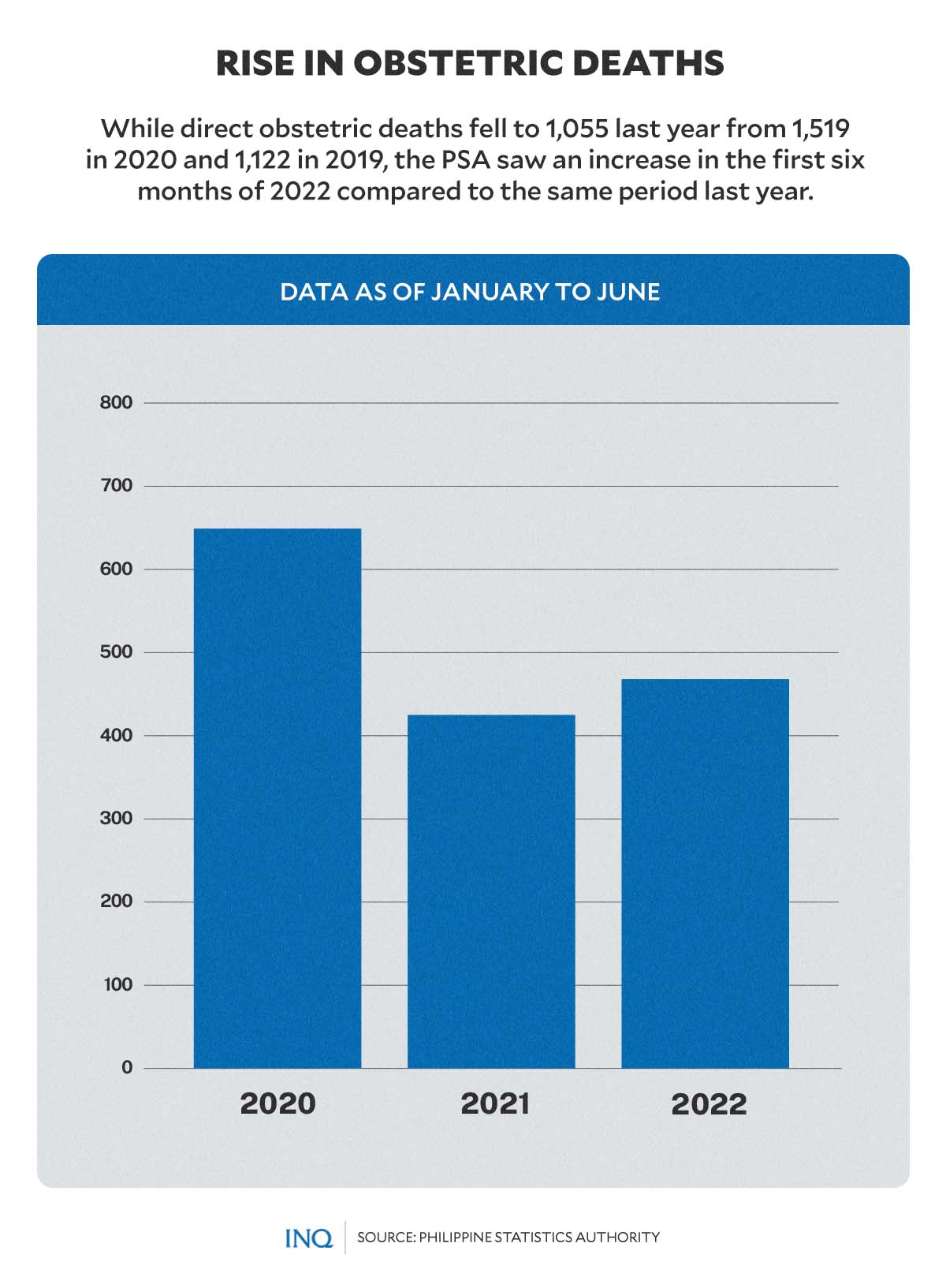 Direct obstetric deaths, or direct maternal deaths, are those that result from obstetric complications of pregnancy, and from interventions, omissions, or mistreatment.

Similarly, the Commission on Population and Development (PopCom) said newborn deaths were lower in the first six months of 2022 (3,686) compared to the same period in 2021 (4,424).

However, he said newborn deaths, or deaths caused by certain conditions originating in the perinatal period, are now the 17th leading cause of death in the Philippines, higher than 18th last year.

So should the government say home birth is still the problem?

No less than PopCom’s executive director, Lolito Tacardon, said “the reasons [for this] could be the delay in referral and, in general, the quality of services provided in the health facility.

He told the ANC that “if we are to assess the overall situation, it indicates the overall quality of the health system”.

Tacardon, however, pointed out that “we do not yet have strong evidence as to the particular aspect of the overall quality of health care provided in our facilities.”

But PopCom said one thing is clear: “The rising rate of their mortality over the past two years has been indicative of the difficulties in obtaining services related to maternal and newborn health.”

This, he said, “has had fatal consequences” and is now prompting the government to provide sufficient medical care to mothers and their newborn babies, especially in the first 1,000 days of life. 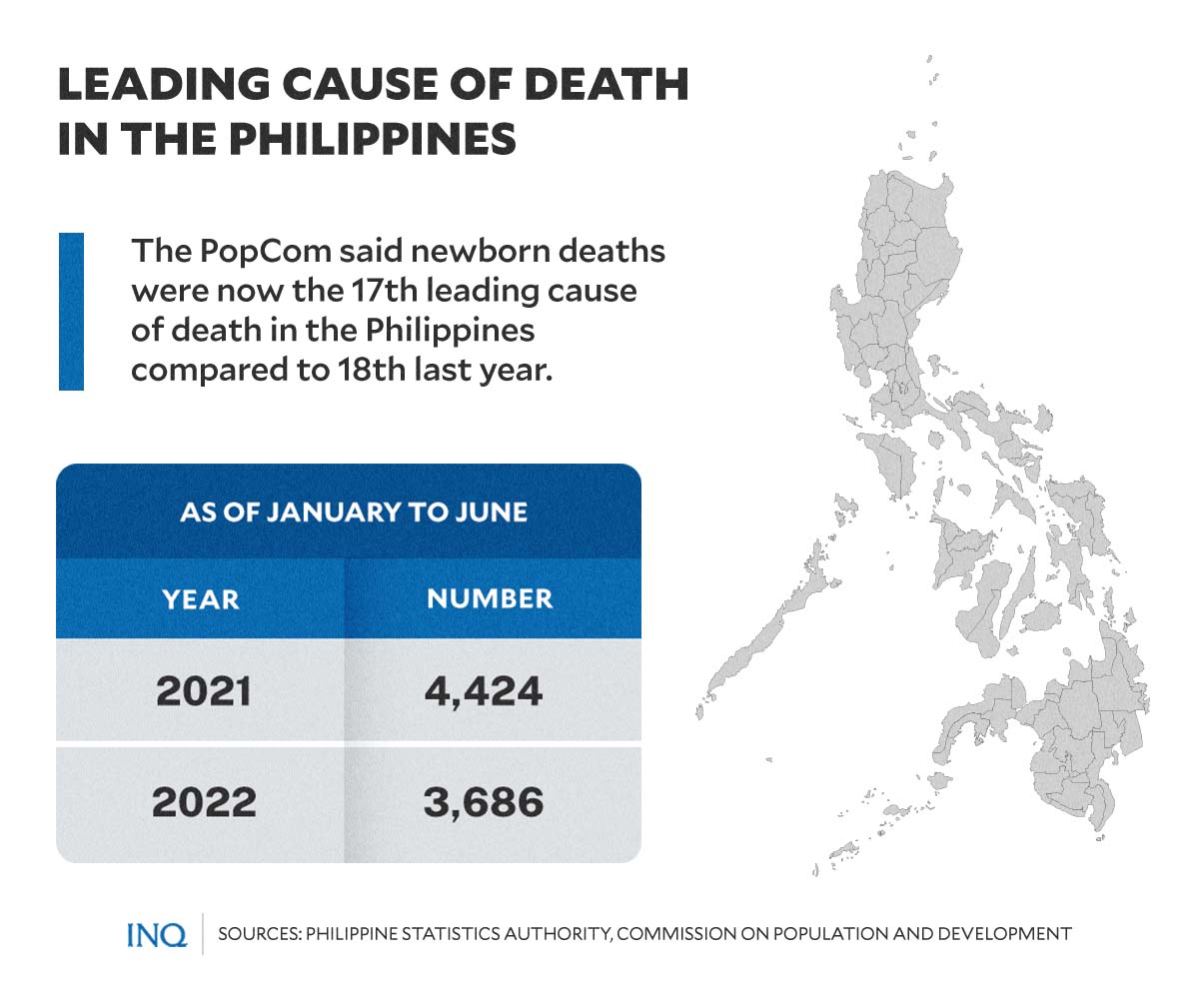 As Tacardon stated, “this condition indicates a problem with access to appropriate, quality and timely services in health facilities”.

RELATED STORY: During the health crisis, breastfeeding mothers and infants should weigh more than the issue of national security

“Our health system should now slowly recover from the deluge of cases caused by the pandemic to ensure adequate services for other health issues such as those related to maternal, infant and child health,” he said. .

According to data from the 2017 National Demographics and Health Survey (NDHS), more than half of women aged 15 to 49 have at least one problem accessing health care, and the most common , at 45%, was “to get money for treatment”. .”

Younger women, aged 15-19 (64%), uneducated women (76%) and women from the poorest households (72%) are more likely than other women to report access problems health care for themselves.

As reported in the NDHS, nine out of 10 Filipino women received prenatal care from a skilled provider such as a midwife (50%), doctor (39%) or nurse (4%).

However, three percent of women received no prenatal care.

It was also learned that women with higher levels of education and those from wealthier households are more likely to receive antenatal care from a skilled provider. 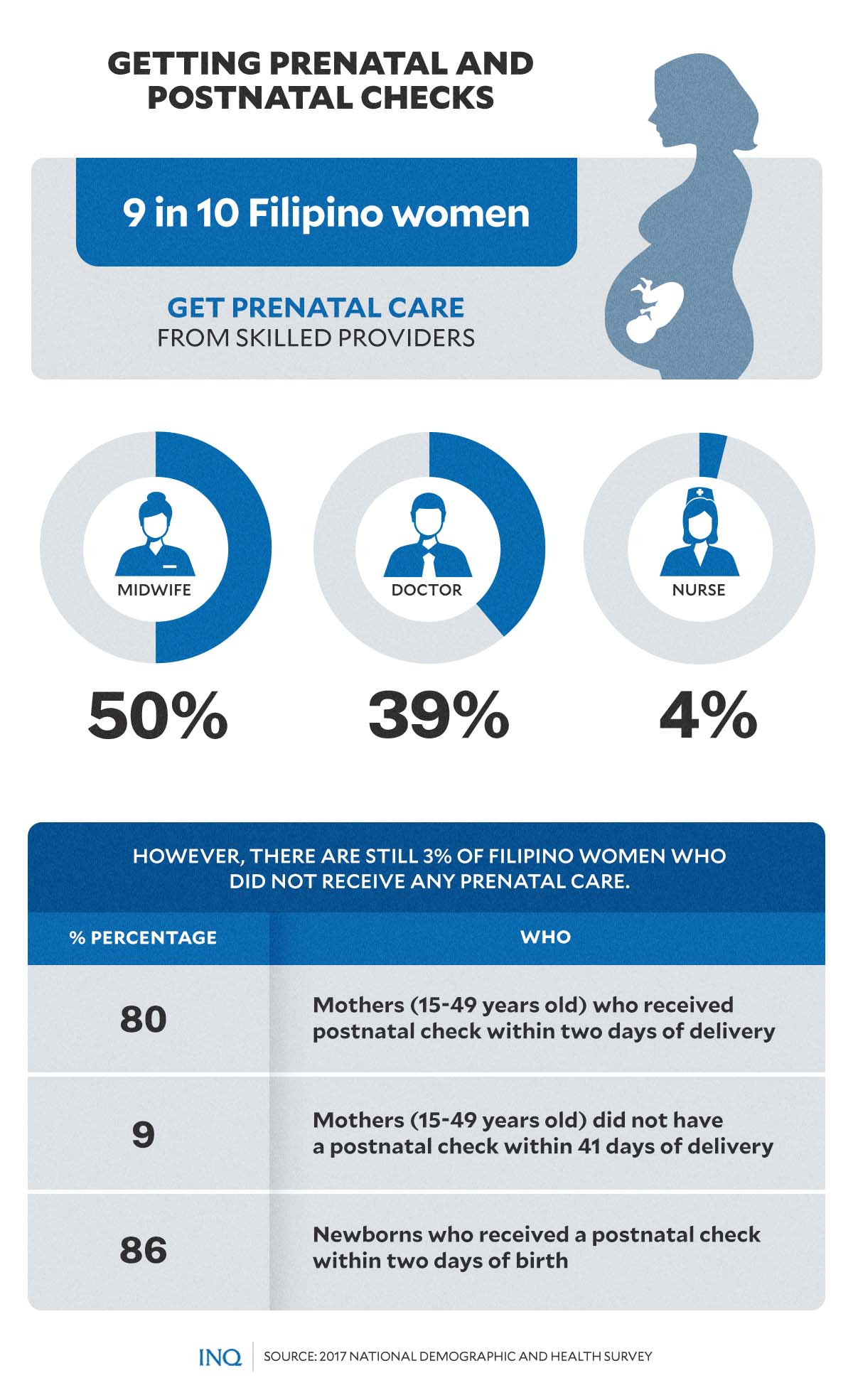 The NDHS said seven out of 10 women had their first prenatal visit during the first trimester, as recommended. Eighty-seven percent of women make four or more prenatal visits. 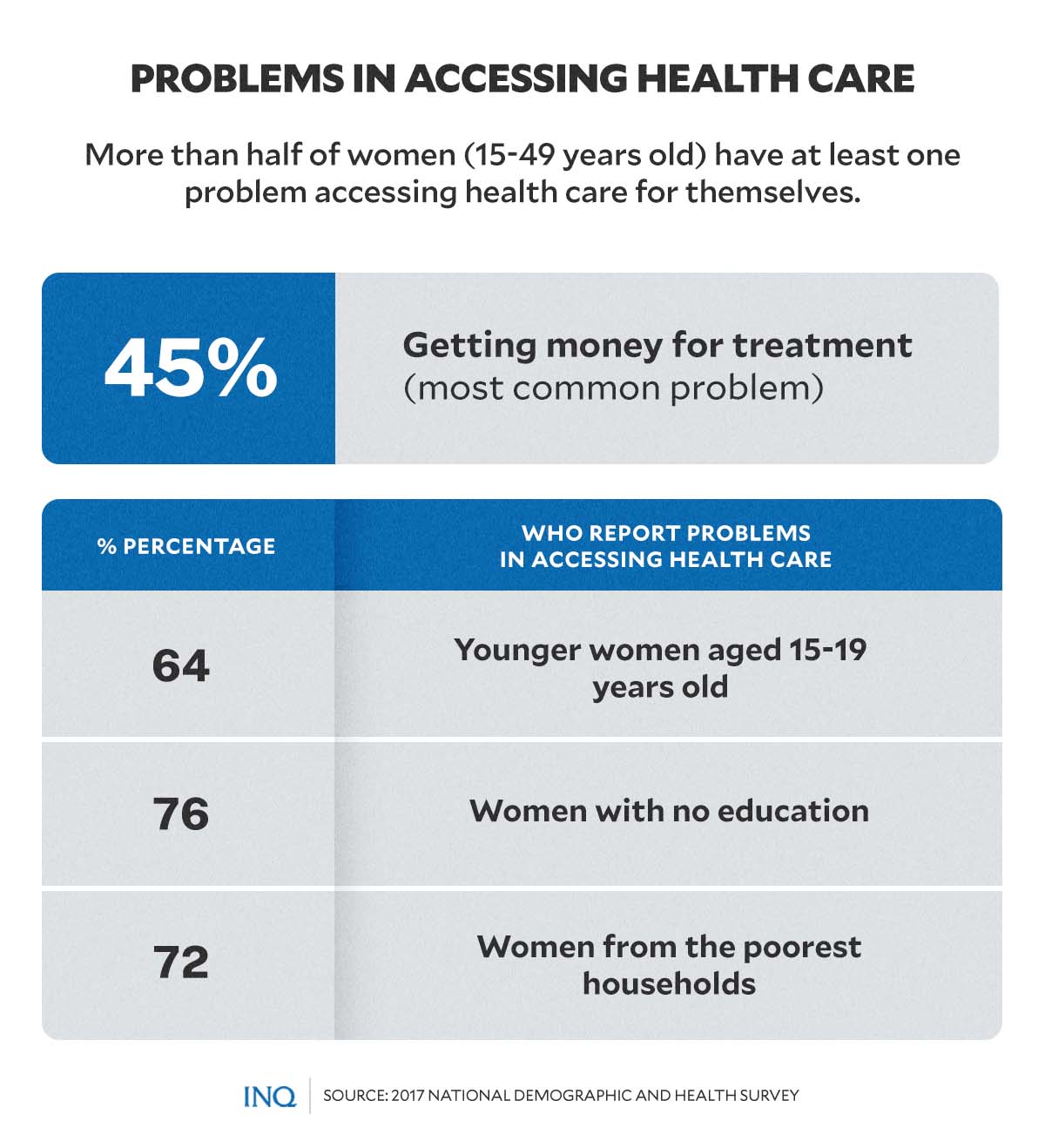 As the Ministry of Health has pointed out, there should be at least four prenatal checks – at least one in the first three months; at least one between the fourth and sixth month; and at least two between the seventh and ninth month.

The World Health Organization has stated that if a mother attends regularly for antenatal care, gives birth in a health facility, and is assisted during childbirth by a skilled birth attendant, the mortality risk for that mother and her newborn born is less.

READ: To save women, newborn babies during childbirth

More than three in four births (78%) took place in a health facility, mostly in public health facilities, the NDHS learned, while one in five births were delivered at home.

The NDHS found that birthing assistance from a skilled provider was highest among urban women (92 percent), those with a college education (97 percent), and those from the wealthiest households (99 percent). %).

Postnatal care helps prevent complications after childbirth, he said, however, nine percent did not have a postnatal check-up within 41 days of giving birth. 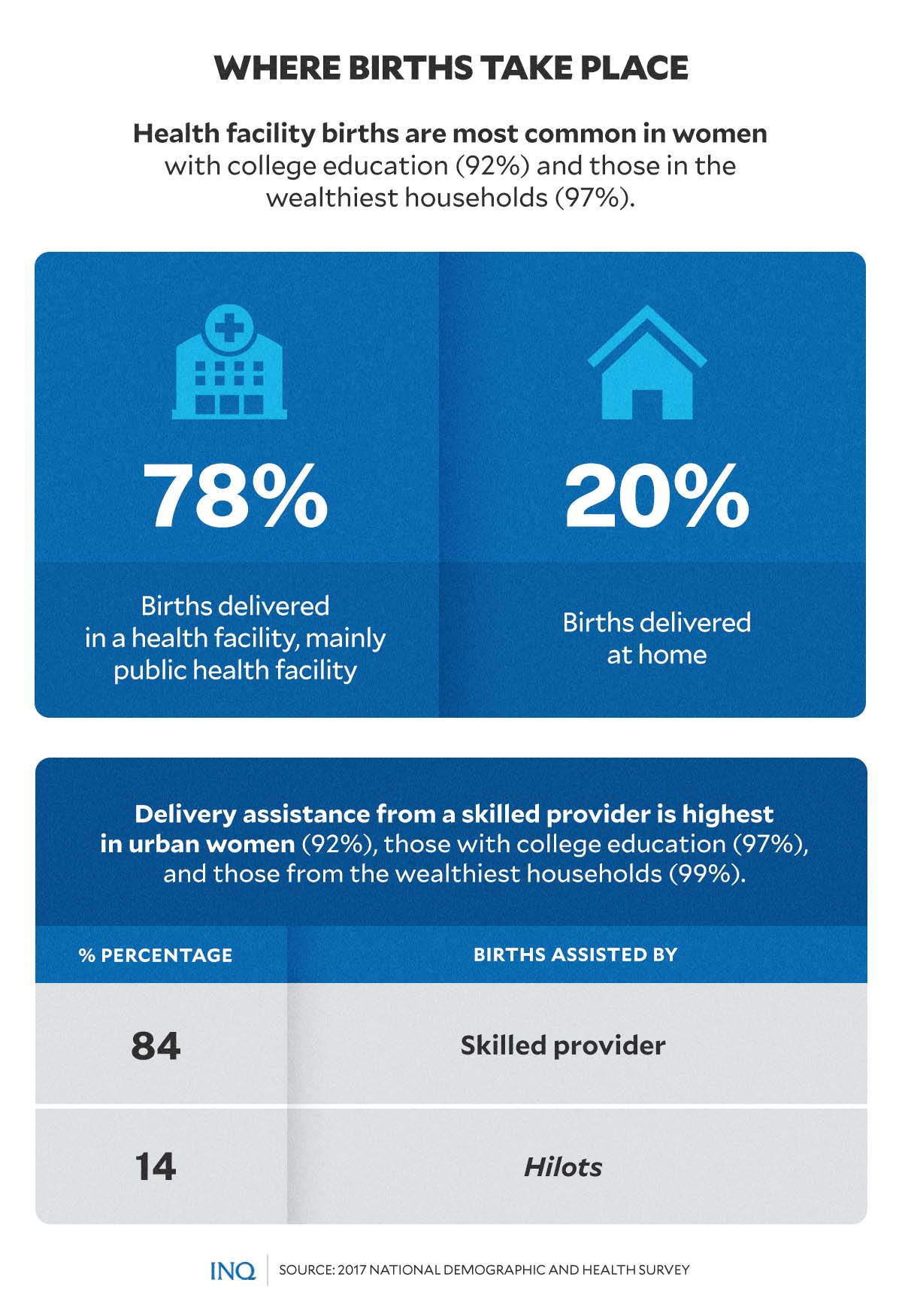 “Household income remains the main driver of inequalities in the use of maternal and child health services in the Philippines.”

Tacardon pointed out that this issue “now calls for the full and intensified implementation of the Universal Health Care Act, as well as the Responsible Parenthood and Reproductive Health Act, which require the maintenance of well-being and the overall health of Filipino mothers and their young children.”